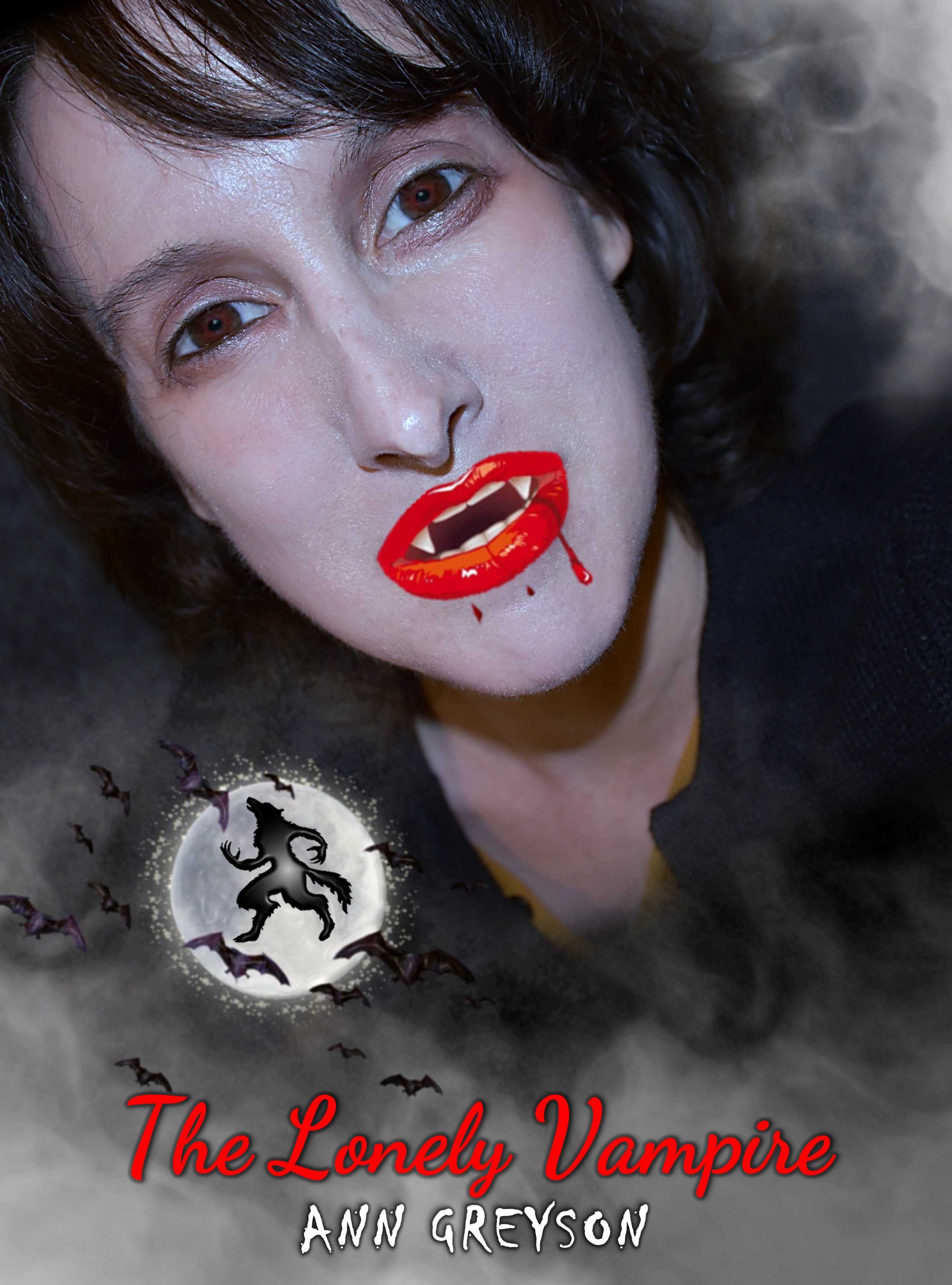 Oh, my, another vampire novel? You may find comfort in The Lonely Vampire which has a ground-breaking take on the vampire as a creature with roots in folklore. A stand-alone intimate story with past tense writing, short (five-or-six-page) chapters, writing in first-person from Myrna Ivester’s perspective and third-person point-of-view for the other characters in the novel to give insight into their motivations. Ann Greyson explores the inexplicable bond between the vampires showing readers just how broad a range her imagination can encompass.

In December 1539, fifteen-year-old Simona Bellu visits Ileana Amanar’s home in Toplita, a commune in Hunedoara County, Transylvania and turns her into a vampire. Simona takes her to Turcu Castle, 16 miles southwest of Brasov, Romania, where she receives the name Ileana Vladislava by Ruxandra Tepes. For the next thirty-eight years she stays at Turcu Castle with other vampires such as Karelyna the Seer and Morsus the Elder.

In 1578, Transylvania, Romanians and Hungarians everywhere unite for the sole purpose to remove the vampires from society by cutting off their heads or driving a wooden stake through their hearts. Ileana Vladislava flees to the town of Gheorgheni in the Szekely Land in eastern Transylvania. From there Ileana escapes to Constanta, a city on the shores of the Black Sea, where she boards a ship for England. Claymor, the werewolf, unique because of a pinch of gray fur on the left side of his face near his ear, plans to go after missing vampires.

2017, Newcastle upon Tyne city in Tyne and Wear, England, Ileana Vladislava is perpetually a lonely vampire in her castle, Wightwick Hall, overlooking the wooded valley of Jesmond Dene, a public park. At forever thirty-one, her pale complexion, striking raven hair and enticing brown eyes, make her a beauty of the first order. Ileana doesn’t like the idea of killing other people in order to survive, rather she feeds on the blood of wild animals or helps herself to bags of blood from the Blood Issue Rooms in the hematology units of hospitals. Watching the film Nosferatu on television, Ileana amuses in the inaccurate depiction of vampires when the character Max Schreck portrays disintegrates from exposure to sunlight. Most true that Ileana thrives in darkness and is sensitive to sunlight, but only long-term exposure will inflict severe burns to her body. When Ileana sees Myrna at the Newcastle City Library, she has her fangs set on her because there is something about Myrna that sets her apart from anyone else. Myrna, a beautiful twenty-four-year-old with blue eyes, long dirty blonde hair, a fair complexion and slim figure is a nursing assistant at Longwood Nursing and Rehabilitation Center, where she helps elderly residents with all aspects of their daily care, but is soul searching for something better which Ileana senses right away. Longing for a vampire family again, Ileana emerges from sadness and loneliness to make an eternal connection by appearing as a bat in Myrna’s dream. In all actual, Myrna is under hypnosis, in a state of deep trance, spell-inducing sleepwalking into the woods for a rendezvous with Ileana who turns her into a vampire without her consent.

Unlike her best friend and roommate Siobhan Mulcahy, whom she met while attending Northumbria University and who is satisfied with her status in life obtaining all the things she wants, ever since the death of her parents at the age of five Myrna has been longing for something better out of life and feels her life isn’t progressing along. In the midst of a life-shaping event, the reader will feel Myrna Ivester’s joys and pains, and will appreciate how her relationship with Ileana develops. An astonishing attraction that teases her at just the right time in her life, Myrna embraces her endless immortality without giving a second’s consideration to her bloodlust. Leaving her old life behind (only family aunt Eowyn Dymtrow, her job, and friend Siobhan) is heart-wrenchingly sad enough to make you cry or hold back a tear or two, but Myrna finds what she has always been looking for in the vampire’s life, and it doesn’t get much better than this. Who Myrna is at the beginning of the book is not the same person she is at its end. Join Myrna as she truly discovers who she is and the truth of her destiny.

Nothing can prepare you for Lorraine Krag, a nosy busybody neighbor, who lives in a house nearby Ileana’s castle. A former schoolteacher of twenty years from Norwich, this haughty redhead in her mid-sixties nags at her husband Arthur with a never-ending stream of meddling that may lead to the discovery of the truth about Ileana or reach the wrong conclusion entirely, making things fall out-of-your-chair funny along with a thick vein of sly.

It goes without saying that vampire-novels are not all the same and never quite that simple as The Lonely Vampire moves in a different direction. So much more believable and down to Earth, this story will appeal to vampire aficionados as well as anyone who’s fed up with what passes for horror today. Ann Greyson ups her writing game, digging deep into the quirks of her characters. You can connect to a vampire’s world chock-full of characters (such as April Fielding, a seventeen year old with bleach blonde hair, a platinum tongue ring, a graphic tattoo of a vampire chick with blood dripping from a fang on her right shoulder blade, and who likes to wear mostly black clothes, takes interest in Ileana who orders plants for her greenhouse from Pike Nurseries where April is a sales associate; and Viktor Pavlovic, a former headline act magician of a circus from Zagreb, Croatia now a street performer with his side act Jasper, a little brown monkey, performing usually at Old Eldon Square) whose strength comes from being different, outcasts that reclaim the concept of weird, wearing it on their sleeve like a badge of honor. Needless to say, it is another highlight of the book which will no doubt be of interest to vampire fans. This tale of a good vampire will hold up on its own, and engage your imagination right up to the conflict with the werewolf, who at long last finds the missing vampire from Transylvania. Or does he?

The stakes are higher than ever in this dark, engrossing story full of passion, humor, and a fairy tale ending with such a twist that after reading The Lonely Vampire in its entirety you’ll want to read it again to make sure you really get it. Because in the end none of it is the way you expect it to be, is this story’s most non-conformist aspect of all. The Lonely Vampire has such a good finish, people who read it will feel like they are waiting for the ball to drop on New Year’s Eve and, when it does drop, you don’t see it coming and that’s the reason you’ll adore this book.

Professional Praise for The Lonely Vampire

It’s very much its own thing and satisfies the itch for a new vampire novel obsession full of angst, dark imagery and a mash-up of slapstick comedy ... And it may be a bit risque, this enigmatic bond between the women vampires, that transcends such trivial distinctions as compatible personalities and interests, centering instead on a common desire for a supernatural existence ... When Myrna breaks away from her past to follow her true calling in life is where Ann Greyson captures the struggle between going against your instincts and satisfying your desires ... In the end, Ann Greyson delivers a struggle of good versus evil with the impending return of Claymor, the werewolf, that is the kind of unpredictable conclusion that all horror readers crave - utterly shocking yet craftily forecast, and sentimental to say the least. These good vampires, Ileana and Myrna, grow on you with every passing page, so much so, you find yourself hoping that the vampires will prevail.
LibraryThing 5-star review by Candice Jenkins - September 3, 2020

Consumer Feedback for The Lonely Vampire

Though much of the story is on cruise control, driven by the forward momentum of Ileana escaping the loneliness in her life, Greyson jerks the wheel and intentionally veers off course with the character of Myrna Ivester whose narrative voice is an intriguing tool that keeps my interest through the whole thing ... Her story is ultimately uplifting as she gives readers a compassionate glimpse into her emotional journey toward becoming a vampire soon after Ileana takes a bite into her. One can almost feel the heat rising from the pages while reading of the physical sensations occurring during Ileana’s seduction of Myrna ... The blending of fantasy and the everyday is so flawless, that you think anything is possible in The Lonely Vampire.
Google Books 5-star review by Google User - September 19, 2020

A unique novel that breaks the walls of Genre. Most enjoyable story about vampires. The history of Romania that the book talks about is interesting as the back story to Ileana Vladislava’s past.
Amazon 5-star review post September 16, 2020 from Goodreads 5-star review by Meaghan D’Otazzo - September 4, 2020