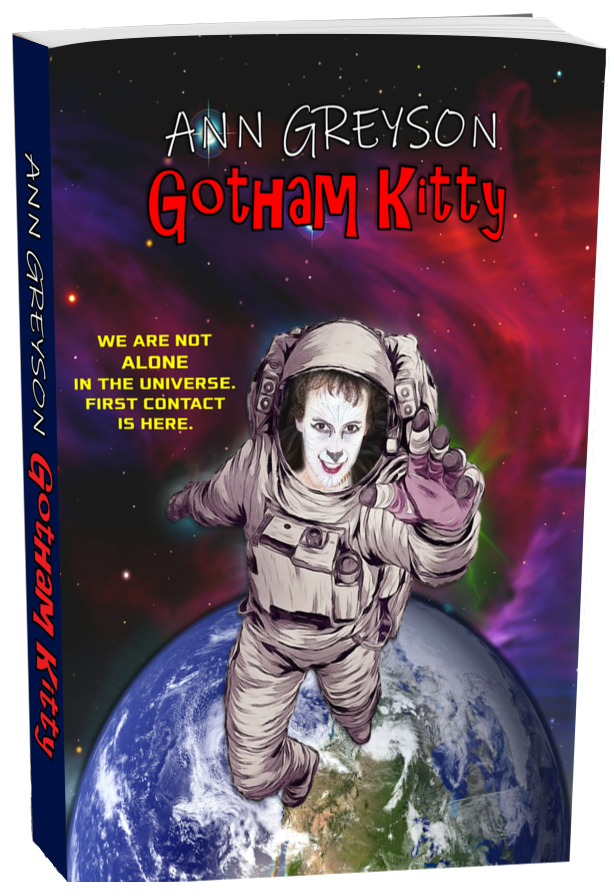 Gotham Kitty is an American science fiction multimedia franchise, centered on the short TV programs puRR (2018), a prequel followed after the original Gotham Kitty (2013) created by Ann Greyson, that includes cinematic book trailers, and collectible, story-driven images. The 2021 novel adaptation explores the imaginative world of alien races and their interaction with humans alongside folklore and superstition. This stand-alone novel has present tense writing in third-person point-of-view for the characters, and short (five-or-six-page) chapters.

1809. The Mount Meru volcano erupts in the middle of a Chagga sacrificial ritual to end the great drought. About a dozen people die in fires from a series of fast moving lava flows that make contact with Chagga banana-leaf roof huts. The blame falls on the Paramount Chief for stubbornly carrying on the ritual on the foothills of Mount Meru. The god Ruwa is angry about lives lost and unleashes a curse on this Bantu tribe of East Africa. The Evil Shadowy Figure is born. This havoc wreaking spirit from the depths of the netherworld possesses the spirits of the victims of the fires. Prophecy has it that the day an extraterrestrial falls from the sky, the tribe can perform a ritual to end the supernatural curse on them and free the spirits from the Evil Shadowy Figure.

December 2010. Nearly two hundred-years later, the curse of the Evil Shadowy Figure still plagues the Chagga that have members residing on the foothills of Mount Meru, where they grow Arabica coffee, bananas, and medicinal herbs that they sell at local markets in Arusha.

In a far-off galaxy, a Brozian cargo vessel is enroute to Vlar Station, a remote trading port, where the insectoid smugglers plan to sell a female Catusapien in their captivity. When the spaceship slips into a wormhole, turbulence allows the Catusapien to escape her cell. The ship spits out near Earth into the Milky Way Galaxy. The Catusapien yanks out some wires behind a wall panel in the engineering area before fleeing in an escape pod.

Originally from Buffalo, New York, Allison Banes, a pretty twenty-eight year old woman with brown-hair and eyes, slim, very independent and an aspiring primatologist, is in Tanzania working on a Doctor of Philosophy degree from Cornell University of Ithaca, New York. While conducting her PhD dissertation research in behavioral ecology of black-and-white colobus monkeys in the Mount Meru Forest Reserve of Arusha National Park, Allison sees the Brozian spaceship explode in mid-air and crash land. Nearby the crash site, the Catusapian crawls out of the escape pod, suffering from something like jet lag, her body has trouble breathing the air on the Earth. Allison finds the half-feline half-human extraterrestrial asleep. Overtaken by this discovery, she carries the alien off to her Honda Odyssey minivan, taking her home with her for observation. She even names her Kitty so if anyone hears her call out to her, they think she has a cat.

Park Ranger Paulina Mongella discovers the spaceship crash and escape pod, tells her boss Geoffrey Mkama, who then informs his Tanzania National Parks Authority supervisor. The heads of TANAPA, confiscate the escape pod for study and research. Fast forward to months later, they decipher the aircraft as the property of an insectoid alien race. The authorities never learn about the Catusapian, nor ever hear about her. For the months that follow, they discreetly search East Africa for an insectoid being that they never find. So, the case of the spaceship crash closes.

The alien’s arrival unleashes the spirit of Sayida Jaquier, a victim of the volcanic fires of that hundreds year old tragedy and whose soul is under the control of the Evil Shadowy Figure. Allison Banes falls victim to the Evil Shadowy Figure for harboring the Catusapien alien, who then retreats to the forest surrounding Lake Duluti. Her friend Azita Hussein, a medical internist at the medical clinic GoHealth Walk-In Urgent Care in Tanzania, comes into the story as all business. She finds Allison’s small field notebook documenting the alien from outer space and goes on a search for the alien and for answers to Allison’s questionable death of what appears to be a heart attack. These events change Azita, who finally opens herself up to the people of Africa.

After spearfishing on Christmas Eve, Geoffrey’s 11-year-old daughter Cassidy Mkama, sees the alien and tells her friend Laila Diwani, a Chagga member who tells the tribe’s Paramount Chief, Anton Naruma. Chief Naruma already detects a disturbance in the supernatural world since recently having a dream with the Evil Shadow Figure. Additionally, Sayida Jaquier is the six times great-grand-aunt of Laila, who must participate in the ritual to set her soul free and end the curse on the Chagga. Though Laila has no desire to be a Chagga, her key role in this will inevitably change the way she feels about being Chagga.

The Catusapien can’t return to her home planet. The alien will live out the rest of her life in East Africa, carrying on a lifelong friendship with Cassidy, who will name her Gotham Kitty. When the Evil Shadowy Figure is long out of people’s minds and some years after Gotham Kitty’s passing, the story of this adorable alien’s arrival and life in East Africa becomes the Chagga’s new campfire story to share with the future generations. 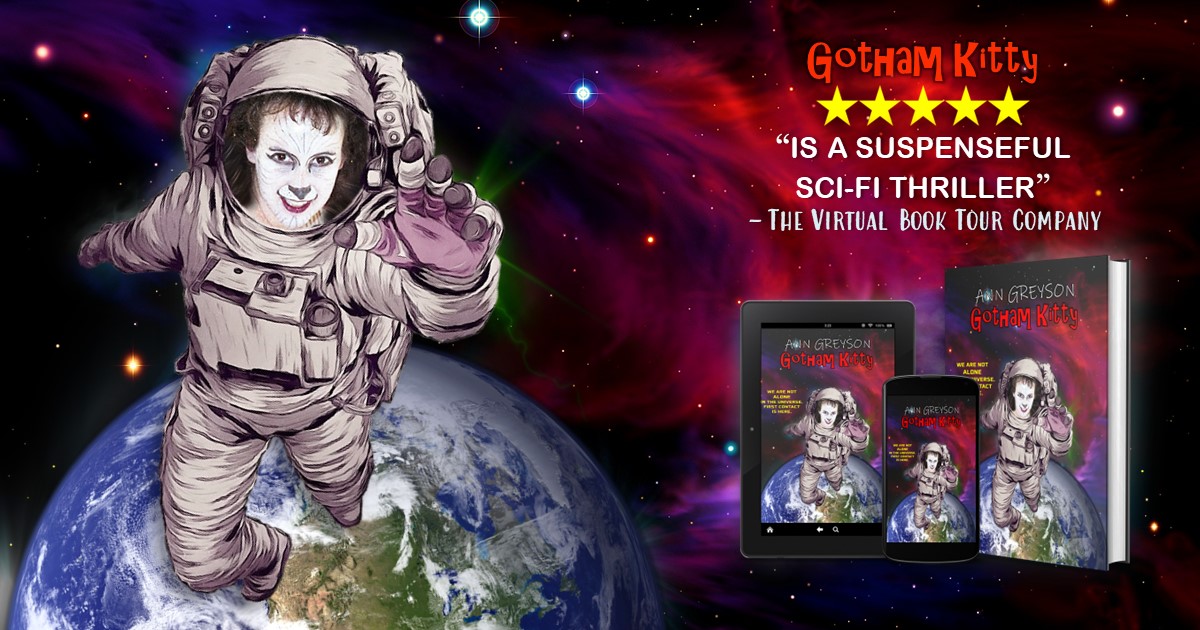 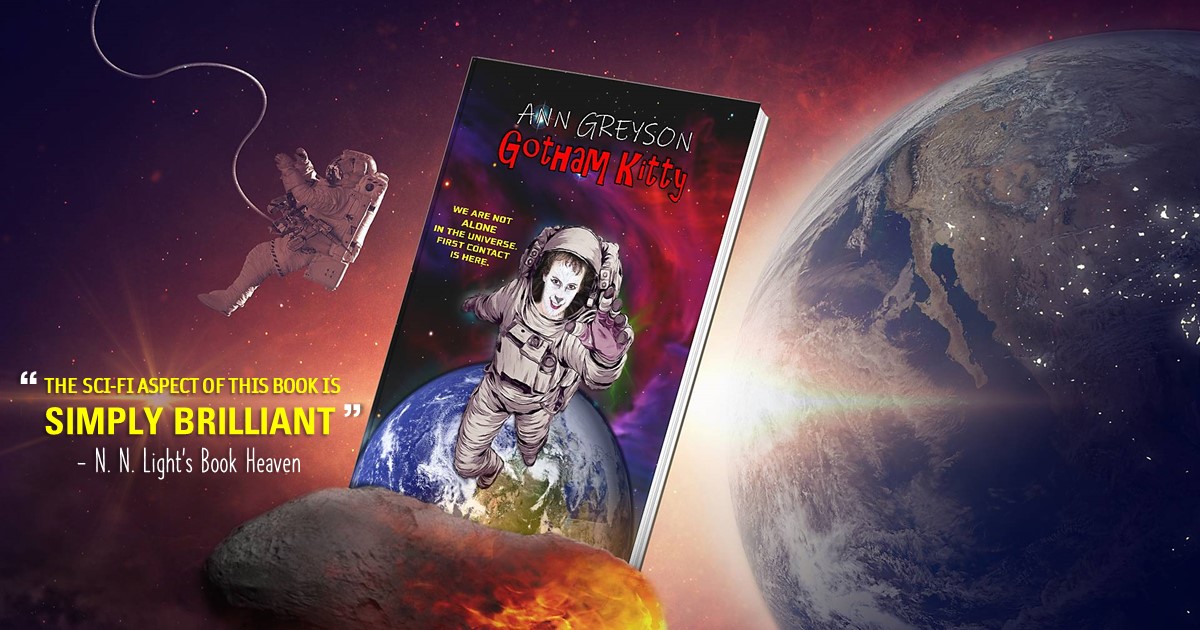 Her writing is really pretty great ... For example ... typically, prologues are skipped over and let’s face it, sometimes boring. But I was hooked from the get-go and immediately connected with the character Allison Banes. I was thoroughly impressed by the storytelling. So much so that I found myself slipping into reading more than editing because I was so easily wrapped up in the story.
Purple Shelf Club 4-star review by Alexis Miller - March 14, 2022
I was lucky enough to be an editor for Gotham Kitty. While I may be biased, I must admit that I do love this novel. It is a great book with lovable characters and a story that will stir up your emotions. What more could you ask for from a science fiction novel?
Purple Shelf Club Top Rated #6 by Alexis Miller - February 11, 2022

Can a little alien stranded on earth prove the catalyst for defeating an ancient threat? Fans of paranormal fiction will relish the growth of Kitty as she perceives her new world, finds a place in it, and uncovers a strength unusual for the females of her species ... Gotham Kitty also excels in a sense of family and community as Kitty is introduced to the Chagga people, whose prophecy helps events and mysteries become more understandable ... The blend of sci-fi and paranormal elements raise the book’s appeal to a wider audience. Despite its youthful characters, the story should reach into adult circles with its satisfying twists and turns and unusual premises ... Whimsical, involving, and filled with action, Gotham Kitty is recommended for a wide age range, who will find the mix of sci-fi and paranormal action inviting and original.
Booklife and Donovan’s Bookshelf from Midwest Book Review review by Diane Donovan - December 10, 2021

A fascinating story about the friendship between a girl and a half-feline half-human extraterrestrial, named Kitty. Great read for sci-fi genre lovers! A captivating well written masterpiece by Ann Greyson!
Goodreads 5-star review by Jennifer Kinley for Reviews Fall - October 20, 2021

This is an enthralling science fiction story with a unique setup. I was just as intrigued as the characters were when trying to figure out what new life has entered their world. The author exceptionally weaves two plots together to create a rich and engrossing story ... The story is told from constantly alternating points of views that give readers a well-rounded understanding of what’s going on in the story and ensures readers know the motivations of all the characters ... It all eventually comes together in the end with a great cliffhanger ... Gotham Kitty is a fantastic story that feels much more like a drama rather than a straight science fiction or paranormal story. I recommend this book to readers who enjoy character driven stories with hints of supernatural and sci-fi elements that color the story rather than take it over.
Literary Titan 4-star review by Thomas Anderson - September 27, 2021

The sci-fi aspect of this book is simply brilliant. Gotham Kitty (or Kitty as she was called by Allison) is the best character in the book. The scenes with Allison and Kitty are some of the best I have ever read in my entire life ... I could have read a book about the life of Kitty living in a treehouse and never gotten bored ... Fans of sci-fi that mixes with paranormal will want to read this book. There are scenes of intense thriller that could captivate a reader.
Goodreads and Amazon 4-star review post September 22, 2021 from N. N. Light’s Book Heaven 4.75-star review by Mr. N - September 21, 2021

Gotham Kitty is a suspenseful Sci-Fi thriller about a lone alien survivor in a fatal crash that kills her captors, another species of aliens. Neither she or they had any intention of landing on planet earth, but she couldn’t have found a better sanctuary than Tanzania. I rate this 5 out of 5. Once again, Ann Greyson has applied her masterful storytelling to bring her characters to life. The imagery transports you to the African savannah and paints a vivid picture of life on a game park. The story steadily gains momentum with every new character and reaches a satisfying climax at the end.
The Virtual Book Tour Company 5-star review by Maureen Muringo Wahu - August 30, 2021