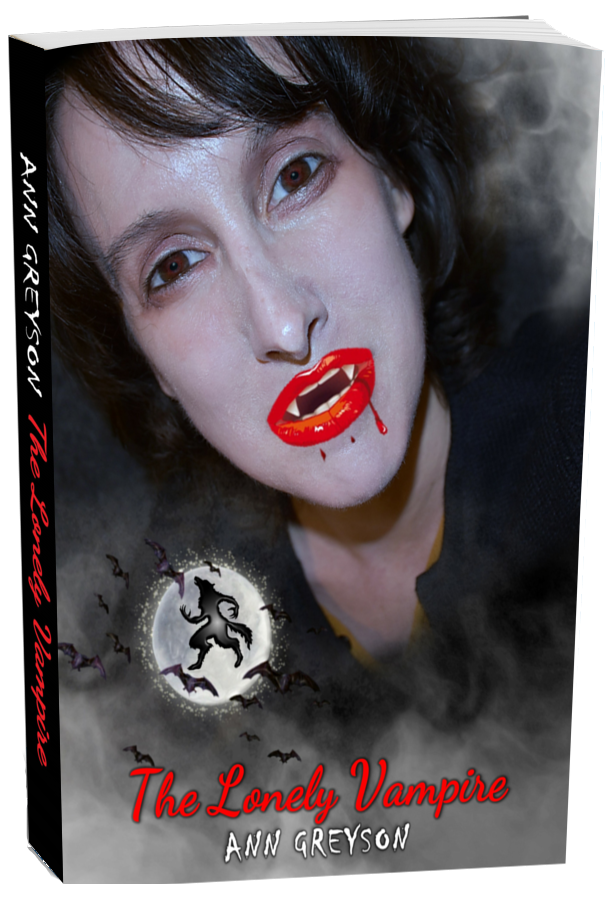 The Lonely Vampire is an American horror multimedia franchise, centered on a short TV program The Lonely Vampire (2017) created by Ann Greyson, that includes cinematic book trailers, radio advertisement, and collectible, story-driven images. The 2020 novel adaptation is a throwback to horror classic folklore with past tense writing, short (five-or-six-page) chapters, and third-person point-of-view for all the characters except Myrna Ivester. This stand-alone intimate story told through Myrna’s first-person perspective narrative about how she became a vampire, explores the enigmatic bond between vampires that transcends such trivial distinctions as compatible personalities and interests, centering instead on a common desire for a supernatural existence, and further explores the vulnerabilities associated with loneliness.

December 1539. Fifteen-year-old Simona Bellu visits Ileana Amanar’s home in Toplita, a commune in Hunedoara County, Transylvania and turns her into a vampire. Simona takes her to Turcu Castle, southwest of Brasov, Romania, where she receives the name Ileana Vladislava by Ruxandra Tepes. For the next thirty-eight years, she stays at Turcu Castle, happily living with other vampires such as Karelyna the Seer and Morsus the Elder.

1578, Transylvania. Romanians and Hungarians everywhere unite for the sole purpose to remove the vampires from society, along with the help of Claymor Elgany, a werewolf and vampire hunter bent on revenge. Disguised as a bat, Ileana Vladislava flees to the town of Gheorgheni in the Szekely Land in eastern Transylvania, then escapes to Constanta, a city on the shores of the Black Sea, where she boards a ship for England.

2017, Newcastle upon Tyne, a city in Tyne and Wear, England. In a mostly cloudy to rainy atmosphere, Ileana Vladislava is a lonely vampire in her castle, Wightwick Hall, which overlooks the Jesmond Dene public park. At forever thirty-one, her pale complexion, raven hair and enticing brown eyes, make her a beauty of the first order. To maintain her supernatural existence, she feeds on the blood of wild animals or helps herself to bags of blood from the Blood Issue Rooms in the hematology units of hospitals. She thrives in darkness and is sensitive to sunlight, an energy feeder that can affect electricity which cuts on and off in her presence in places like a subway car, hospital corridor and the public library.

Throughout the years, Ileana manages to keep her vampire identity a secret even from the nosy Lorraine Krag, who lives in a house on Jesmond Dene Road, a road that is dusty and gloomy like a cemetery, within the spooky atmosphere of Wightwick Hall. A former schoolteacher from Norwich, this haughty redhead in her mid-sixties nags at her husband Arthur with a never-ending stream of meddling that, rather than lead to the discovery of the truth about Ileana, reaches the wrong conclusion entirely.

Ileana’s humdrum eternal existence changes that magical moment she sees Myrna Ivester at the Newcastle City Library. A lonely soul herself, Myrna is a beautiful twenty-four-year-old with long dirty blonde hair, a fair complexion, and a slim figure who works as a nursing assistant at Longwood Nursing and Rehabilitation Center, where she helps elderly residents with all aspects of their daily care. Longing for vampire camaraderie again, Ileana emerges from loneliness by spell-inducing, hypnotizing Myrna into a state of deep trance, sleepwalking her into the woods for a rendezvous. Ileana bites into her neck sensing that it is Myrna’s destiny to want the vampire life. Later on, Myrna only remembers having a dream with a bat.

Myrna had been longing for something better out of life ever since the death of her parents at the age of five. She feels unlike her best friend and roommate Siobhan Mulcahy, who is satisfied with her status in life obtaining all the things she wants. As she physically changes, Myrna embraces her immortality without giving a second’s consideration to her bloodlust, feeling that something magical finally happened to her. Sadly, she leaves her old life behind (only family aunt Eowyn Dymtrow, her job, and friend Siobhan). Now a vampire, her senses heighten, and her dreams evolve into something premonitory as she develops the gift of second sight.

The Lonely Vampire is chock-full of outcasts who cross paths with Ileana and Myrna. These characters’ strength comes from being different, reclaiming the concept of weird and wearing it on their sleeve like a badge of honor. Ileana orders plants for her greenhouse from Pike Nurseries where seventeen year old April Fielding is a sales associate. The awkward young girl has bleach blonde hair, a platinum tongue ring, a graphic tattoo of a vampire chick with blood dripping from a fang on her right shoulder blade and likes to wear mostly black clothes. In various outings Myrna catches sight of the eccentric Viktor Pavlovic, a former headline act magician of a circus from Zagreb, Croatia now a street performer with his side act Jasper, a little brown monkey, performing usually at Old Eldon Square.

Who Myrna is at the beginning of the book is not the same person she is at its end. Despite the bond of friendship between Ileana and Myrna, it is for readers to decide whether Ileana’s bringing Myrna into the darkness of a vampire’s life changes Myrna’s fate for the better, or for the worse. And in the end when Myrna battles Claymor the werewolf, it’s one seat-jumping scare after another. 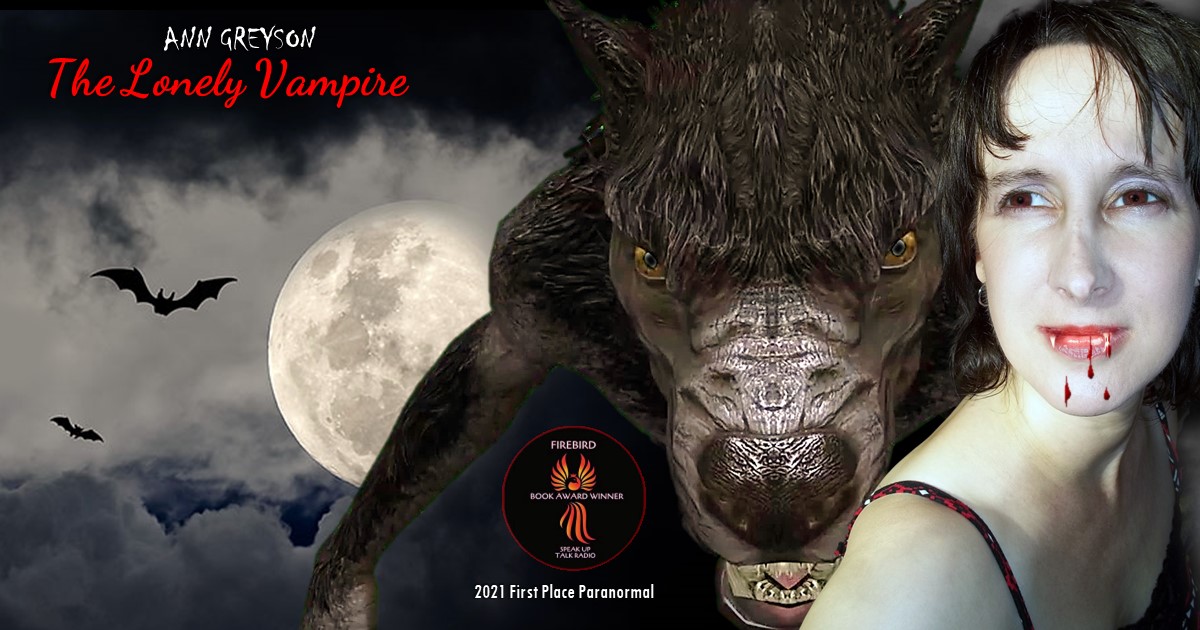 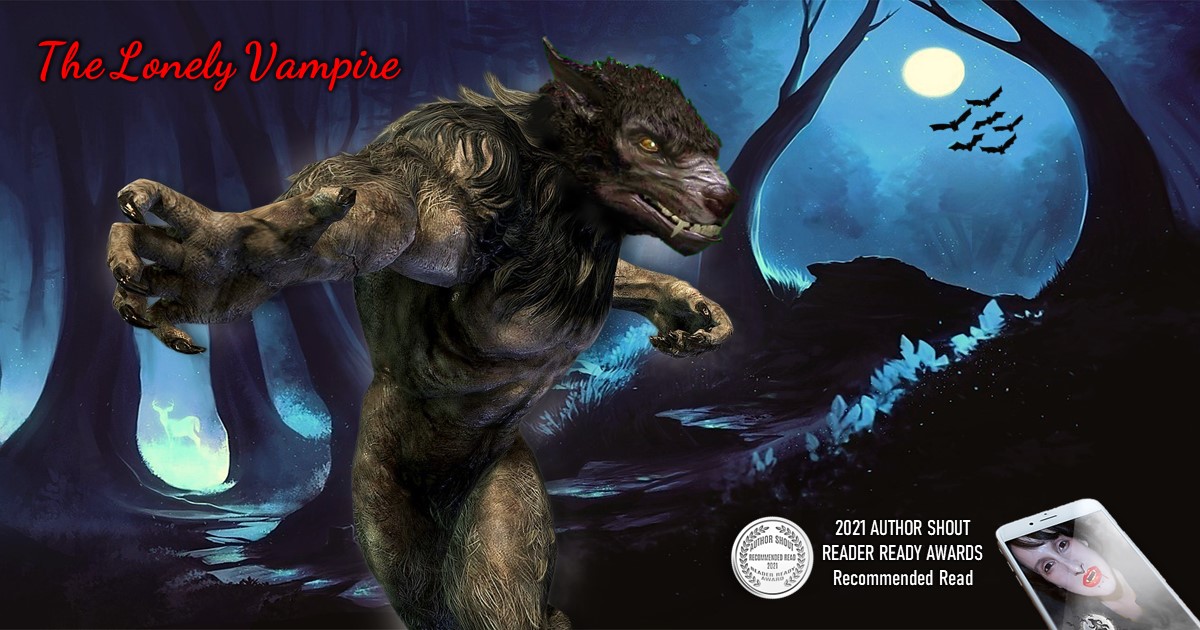 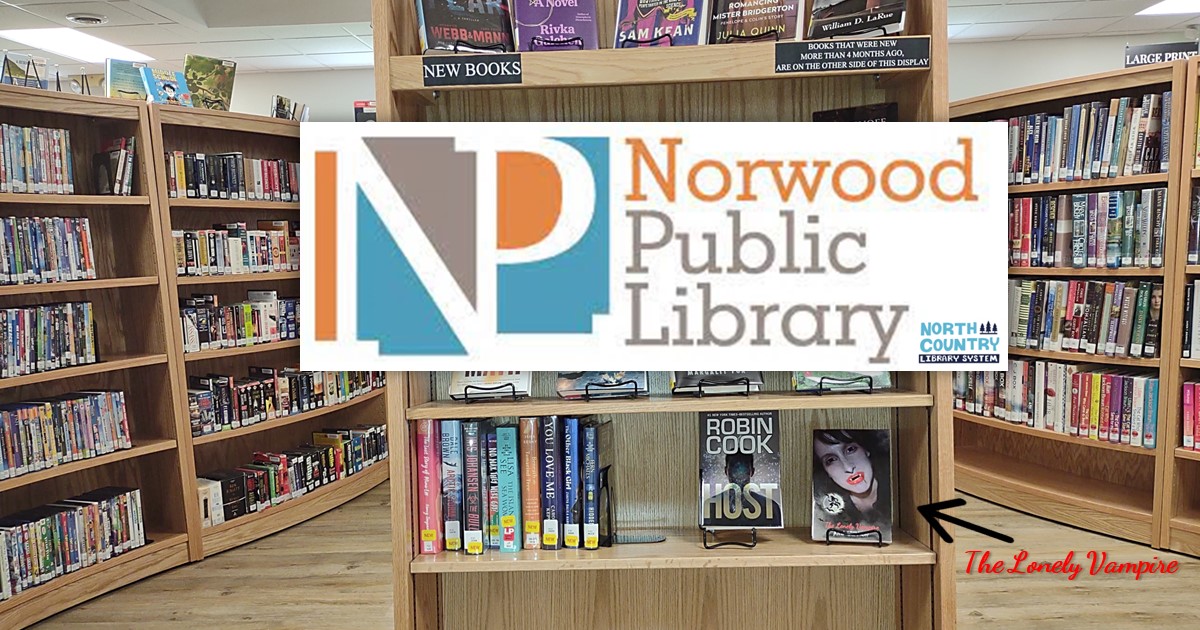 Lonely, but still surviving, she keeps herself hidden from Claymor while annoyed by a prying neighbor. Lorraine and Arthur Krag, the neighbors, provide the right touch of comedy as well as the tension added to Ileana’s safety with Lorraine’s snooping ... Readers will connect with Ileana and Myrna in this fast-moving folklore horror style novel feeling their needs, fears, and search for happiness.
Goodreads and Amazon 4-star review post September 20, 2021 from Angie Mangino Looks at Books 4-star review by Angie Mangino - September 20, 2021

Ann Greyson explores the inexplicable bond between her vampires’ characters showing readers just how broad a range her imagination can encompass.
The Lonely Vampire (RADIO SPOT) Voice Over by Patricia J. Rullo from Speak Up Talk Radio - January 26, 2021 [Broadcast on music streaming and podcast services such as iHeartRadio, iTunes, Sirius XM-Pandora and PlayerFM]

A surprisingly quick read despite its almost 400 pages, "The Lonely Vampire" is a simple story about companionship and self-discovery. The plot follows Ileana and Myrna, two women whose lives are missing something, and stays fairly straightforward for the duration of the novel ... The writing style is also uncomplicated and direct with much telling and light on dialogue ... Overall, "The Lonely Vampire" is a satisfying story about intimacy without being overly sexual and staying true to the classic vampire lore fans have always appreciated.
InD’tale Magazine online from InD’tale Magazine 3.5 star review by Arec Rain - December/January 2020-2021, pages 98 and 99

The Lonely Vampire is as mesmerizing as Ileana’s eyes ... Ileana has lived alone for so long, and Myrna may just be the cure for that. Dodging Claymor the werewolf and a nosey neighbor provides plenty of tension.
Goodreads and Amazon 4-star review post November 25, 2020 and Liliyana Shadowlyn from The Faerie Review 4-fairies review by Liliyana Shadowlyn Greer - November 25, 2020

This tale of a good vampire will hold up on its own and engage your imagination right up to the conflict with the werewolf, who at long last finds the missing vampire from Transylvania. Or does he? The stakes are higher than ever in this dark, engrossing story full of passion, humor, and such a good finish, people who read it will feel like they are waiting for the ball to drop on New Year’s Eve and, when it does drop, you don’t see it coming and that’s the reason you’ll adore this book.
WE magazine for women Author Interview by Heidi Richards Mooney - October 25, 2020

Lorraine is inching closer and closer to the truth with her investigations and time is running out for Ileana ... Will she manage to court a new companion and make a getaway before Lorraine closes in on her? The Lonely Vampire is a chilling thriller with a horror undercurrent. I was so invested in the characters that I didn’t care who won between Lorraine and Ileana. The author, Ann Greyson, created a worthy nemesis for Ileana. I couldn’t decide who I was rooting for ... This is the closest I have gotten to finding a sequel to Bram Stoker’s Dracula. I recommend this to thriller lovers, mystery lovers and to anyone who is partial to a vampire story that pays homage to the original vampire, Dracula.
Amazon 5-star review post November 13, 2020 from The Virtual Book Tour Company review by Maureen Muringo Wahu - October 11, 2020

The book is full of charm: Ileana and Myrna are fascinating protagonists, and the nosey neighbor Lorraine Krag provides lighthearted distractions. Readers will revel in Greyson’s moving depiction of Ileana struggling to come to terms with her lonely existence. The cliffhanger ending leaves hints of more dark tales to come with Ileana and Myrna in the lead. With its cinematic setting and dark intrigue, the book makes for a quick page-turner. Fans of urban fantasy will relish Greyson’s vivid portrayal of a lonely vampire’s life.
Booklife and Goodreads 5-star review post by BooksCoffee from The Prairies Book Review Digital Magazine, Vol. 11, December 2020, page 94 and The Prairies Book Review review by Neena H. Brar - September 28, 2020

When there’s something that Lorraine wants to know, she is relentless. Will she discover Ileana’s secret or will Ileana succeed in scaring her off? ... Ann Greyson’s The Lonely Vampire starts with suspense and action. Amazing imagery brings the setting and characters to life instantaneously ... With an alluring yet calm tone, it draws the reader in ... It is also nice that the book is LGBTQ-friendly although Ileana’s decision to convert Myrna to a vampire so she can be with her might have some readers questioning it ... it’s entertaining enough to ignite the senses.
Goodreads 3-star review post September 23, 2020 and Feathered Quill Blog from Feathered Quill Book Reviews review by Risah Salazar - September 25, 2020