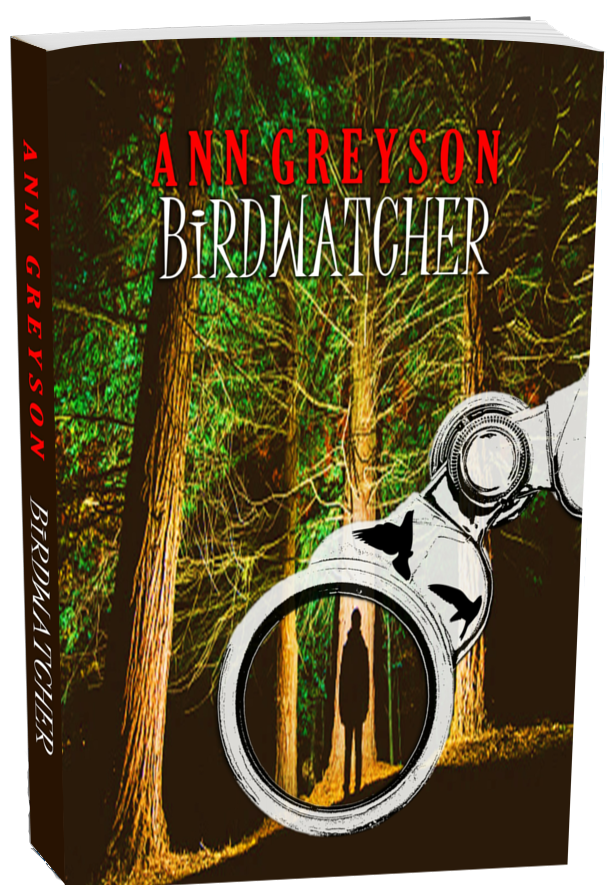 Birdwatcher is an American horror multimedia franchise, centered on a short TV program Birdwatcher (2019), created by Ann Greyson, that includes cinematic book trailers, and collectible, story-driven images. The 2022 novel adaptation explores the darkest corner of human nature entering the perverse mind of Joey Marks a.k.a. Ryan Messer, a psychopath who can kill without remorse and disappear with no clues left behind. Part crime thriller and part ghost story, this novel has past tense writing, short (five-or-six-page) chapters, and third-person point-of-viewpoints.

August 2016. Gillian and Lance Wincoff travel from Watchung, New Jersey to spend a week in a 2-bedroom chestnut log cabin off of Sellersville Drive in East Stroudsburg, Pennsylvania, an idyllic setting in the Poconos. The perfect vacation with their 12-year-old daughter, Abby, an avid birdwatcher. When her mother takes a short nap, Abby sneaks outside to birdwatch. Without supervision, she enters the woods chasing after a pileated woodpecker and in the process gets lost. Unable to find Abby, her mother drives to the Monroe County Sheriff’s Office in Stroudsburg and reports her missing to Sheriff Andy Kirkman. The sheriff and his Deputies, Billy Shipley and Missy Sparks begin the search.

There are no signs of Abby, the facts in this case are hard to find. Early on, the soon to retire sheriff comes to the conclusion that Abby has met with foul play since traces of her blood were found in the sink of an unoccupied cabin on Wagon Trail Road near Sellersville Drive, believing she is the victim of a traveling killer, chosen because of her type. Months later, the election is approaching, and Detective Philip Silverwood from the Pocono Mountain Regional Police Department inherits the case. The detective reaches a similar conclusion that Abby has to be the victim of a serial killer, and that she is not his only victim.

The sad truth is, both Silverwood and Kirkman’s assumptions are correct. Indeed, Abby fell victim to serial killer Joey Marks. Not only has Joey Marks chosen the woods of the Poconos as his new playground but he’s also in the area to honor his late mother who was killed by a serial killer in September 1997, when Marks was twelve years old. Ironically, Sheriff Kirkman played a role recently in solving the 19-year-old cold case murder of Joey Marks’ thirty-two-year-old mother Susannah Rae Dirnberger a.k.a. Randee Rae Devereux, who at the time was working as a topless dancer at the now closed Classy Lady, a seedy dive bar that served lousy beer, formerly in Gouldsboro, Pennsylvania, as she was drawn to the easy money that came with dancing wearing only thong underwear, after a string of odd jobs beginning with a receptionist job at a YMCA.

The novel’s other characters, such as Estelle Rowland, interacts with Joey Marks providing an atmosphere of conflict in an already dark, psychological thriller. Ryan Messer a.k.a Joey Marks finds annoyance with the pesky, odd-looking head waitress at Victoria Station, who wears a portion of her thick salt-and-pepper, shoulder-length hair knotted in a pile held in place with a diamond-studded hair stick on the top of her head, and black horn-rimmed glasses on the bridge of her crooked nose. The four-diamond restaurant is a replica of a vintage European railroad dining car and connects to the lobby of The Stroud Inn, an elegant five-star accommodation where Joey Marks is staying. Lance Wincoff takes his wife and daughter to Victoria Station because Joy Franklin, the cabin’s rental agent, tells him it’s the finest restaurant in Stroudsburg. That’s the day Estelle takes notice of Messer/Marks looking at Abby, suspecting something wrong about it. She begins to watch him closely, writes down the license plate of his red Chevrolet Silverado, and at the end of the novel provides a description of him and his vehicle to Sheriff Kirkman which will potentially help the Abigail Wincoff case.

Unable to find peace from the rippling shock of her murder, Abby’s spirit is unable to cross over, and she begins to haunt the cabin on Wagon Trail Road, where her body was buried. Gail, a 27-year old aspiring novelist and avid birdwatcher, suddenly appears to be staying at that cabin for the peaceful seclusion of the country to write her first novel, Murder in the Poconos. Soon, Gail feels haunted by a ghostly entity. Complications arise when The Clean As A Whistle maid, Millie Dozier comes there to work and ends up being possessed by Abby’s spirit. Scared like never before in her life, the fifty-six-year-old, crossed-eyed Creole woman from the small southern Louisiana bayou town of Plaquemine, vows never to return there. And Gail is really an astral projection of an older self of Abby, an imaginary playmate and ghostwriter for her life and death story.

Birdwatcher captures the afterlife through the imagination of a lonely, restless spirit desperate to bring the parents she loves the closure they desperately need to ease their grief. The novel hits the mark on creepy and mysterious when Abby’s spirit turns away from the glowing portal to heaven light beam and embraces the darkness, which will devour all that is good in her and she will forever haunt the woods where she died and the cabin, where she was buried under the floorboard of the basement. 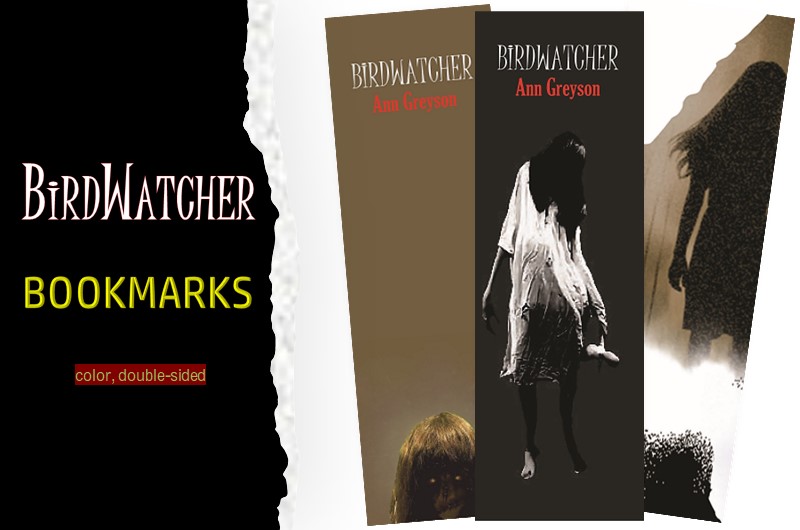 The story unfolds in a bleak and dark, but unrelenting way that is rich with vivid imagery and intense emotions ... Greyson writes a gripping, dark, and entertaining novel that blends horror and paranormal mystery elements. It’s a well-written story that will keep readers engaged and eager to learn about Abby’s fate in the afterlife and the fate of the serial killer ... It’s a fantastic story that will keep you on the edge of your seat and swiftly turning pages.
Goodreads 4-star review post by Literary Reviewer from Literary Titan 4-star review by Thomas Anderson - September 15, 2022

There was even a lesson to be had from this book: don’t go out alone as a child unless you have permission ... This book was so good that I genuinely struggled to find something bad to say about it! ... In short, Birdwatcher is a great, murder mystery story.
LitPick 5-star review by powerlax - September 9, 2022

a spooky crime thriller that kept leaving me wondering what was next ... the overall mood of the book which is dark and suspenseful really helped me envision each scene ... This book had some supernatural parts knitted in like an eerie glow in the middle of the woods and a menacing child giggling in the middle of the night.
Goodreads and Amazon 5-star review post September 9, 2022 from LitPick 4-star review by Caitie - September 5, 2022

"Birdwatcher" is an engaging crime thriller with supernatural elements weaved into the storyline. Readers will be so immersed in the search for the missing girl, her parents' plight, and the ongoing investigation, they will be taken aback by the creepiness that ensues ... the most thrilling part of the page-turner was the unearthly sightings carefully curated by the author. The kind that starts like a faint whisper then bellows hauntingly as the story progresses. An eerie glow hovering around your peripherals, the menacing giggle of a small child, and the jerky movements of an apparition all contributed to the hairs on the back of my neck standing on end. For those who want scary, this book delivers a seriously creepy vibe!
Booklife and Goodreads 5-star review post August 2, 2022 from Reader Views 5-star review by Stephanie Elizabeth Long - July 28, 2022 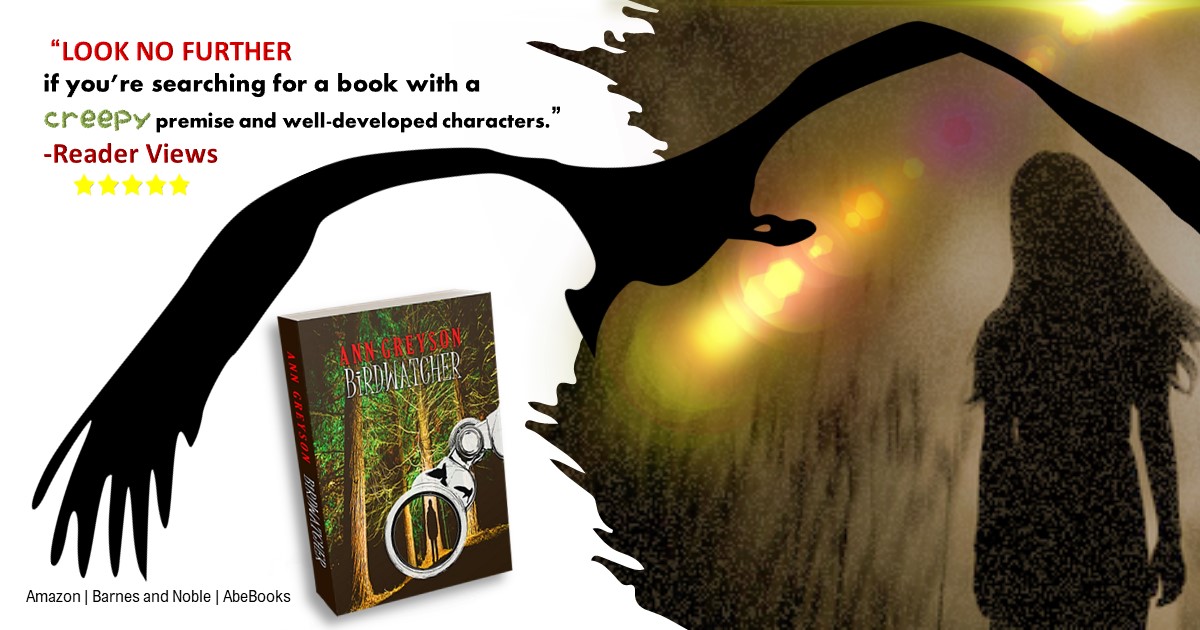