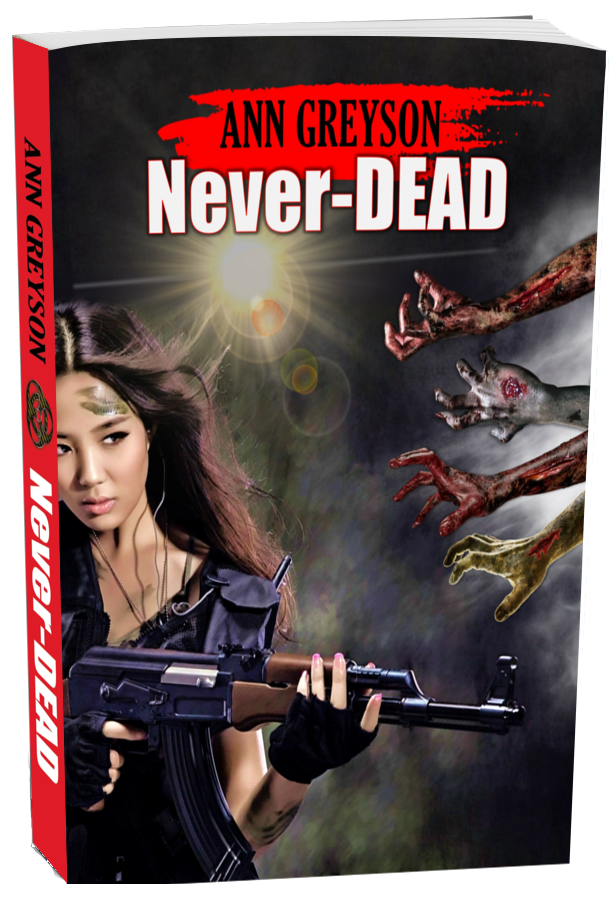 Never-DEAD is an American horror multimedia franchise, centered on a short TV program Never-DEAD (2015) created by Ann Greyson, that includes cinematic book trailers, and collectible, story-driven images. The 2019 novel adaptation is a stand-alone zombie story with past tense writing, humor and purposefully placed cliches, with short (five-or-six-page) chapters. Hannah Winter’s first-person viewpoint narrative voice engages reader’s senses with descriptions easy to visualize and makes them feel like she’s addressing them personally. The third-person perspective for the second-tier, larger-than-life characters such as Ken Langtry, Chloe Park, Dan Saunders, and Vivian Wheeler, who have their own personal drama, creates a realistic atmosphere of anxiety and adaptability in an unrealistic situation.

December 21, 2012 is approaching just as a rabid raccoon viciously attacks a honeymooning couple camping in Chiapas, Mexico near the city of Palenque, a place with a Maya historical site of stone carvings. The woman dies, but the man suffers a bite wound just before he kills the raccoon with a tire iron. He becomes the first carrier of a virus that he spreads to people with merely a few bites. They die and come back as flesh-eating zombies just like him. And, of course, to stop a zombie you must disable the brain, shooting it in the head tends to work best. With this world-changing virus that brings the dead to life, people question the validity to the circulating doomsday prophecy attached to the end of the Mayan calendar.

The plot centers on this communicable disease and the life of 26-year-old Hannah Winter. At five-five, slim, with shoulder-length brown hair and eyes, she’s occasionally pessimistic, but a down-to-earth, cutting-edge computer scientist who works as the head of information technology at Biogenetics & Disease Control. This medical research company beneath the city of Dulce, New Mexico is the focal point for an antidote to the virus where Julie Mehta, a virologist in charge of their state-of-the-art laboratory, takes on the task of developing a vaccine protective against it. What drives Hannah and Julie is hope, which is at the core of this epidemic. For Hannah, it’s expecting Jenna to arrive in New Mexico and for Julie it’s to find a solution to this deadly pathogen facing humanity before every living thing on the planet dies from it.

In a telephone conversation, Hannah persuades her nineteen-year-old sister Jenna to travel from San Antonio, Texas to be with her in New Mexico because it’s the safest place. At five-seven, slender, with green eyes, long light-brown hair, and creamy white skin, Jenna Winter seems to be just another pretty face for magazine covers or movies. Her plan to leave St. Mary’s University and stay in her father’s Albuquerque home while she does nothing but plan a career in modeling and designing clothes, all goes south when she finds herself in a thrill ride toward the (almost) end of the world. Her life is an emotional roller coaster of many setbacks on every leg of her journey to New Mexico. Quite often, she barely gets out of her latest scrape with the leg-dragging, moaning zombies she’s utterly afraid of and that tax her patience with the smell of decaying flesh they leave in the air. She’s not automatically brave, cries a lot and often smokes cigarettes to cope with the stress. Though she wants to quit smoking, the pandemic fuels her addiction. When she sees a thirty-eight revolver lying on a table in a RV, she reluctantly picks it up then teaches herself how to use it. After shooting some zombies dead, she regrets doing it, feeling that she’s doing things outside of her norm to survive. Still, Jenna grows from weakness to something approaching courage, while still holding on to her vulnerability.

Though the novel does not maintain overly Christian thematic interest, you will find Christian context in the novel when it comes to Jenna Winter. She drops out of St. Mary’s University in San Antonio, Texas which has a Roman Catholic religious affiliation. She’s from a Catholic family. And she stays many weeks in the St. Ambrose Catholic Church in Abilene, Texas where she develops a close relationship with Monsignor Anthony Lucca, who provides a balancing philosophy about how to treat and deal with the undead and consoles her about her father Henry Winter’s death in a zombie causing plane crash in the Gila National Forest in Catron County, New Mexico. And since the start of the epidemic, Jenna prays more, often thanking God for her survival.

Using two sisters to hold Never-DEAD together convincingly portrays a time and place of human struggle, complete with action, gore, guns, religion, science, dramatic life-or-death scenarios, movie, and pop music references, cars and eye-grabbing, beautiful strong female leads wrestling against the stigma of the genre, because if all that doesn't grab-you-quick, nothing will. Ultimately, it’s the creepy zombies that scare us in a way we aren’t accustomed to, bringing many of us to the genre for that reason. After turning the final page of Never-DEAD you can expect to want more of this story that has lots of zombie-killin’ action and a Hollywood-style happy ending like a Walt Disney movie. 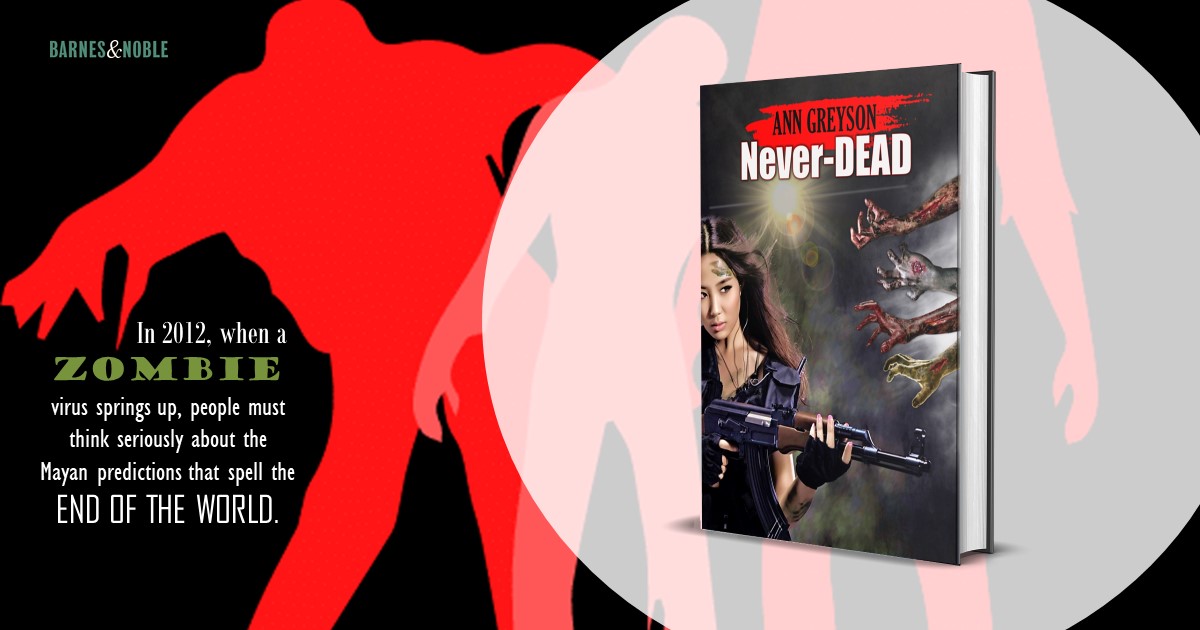 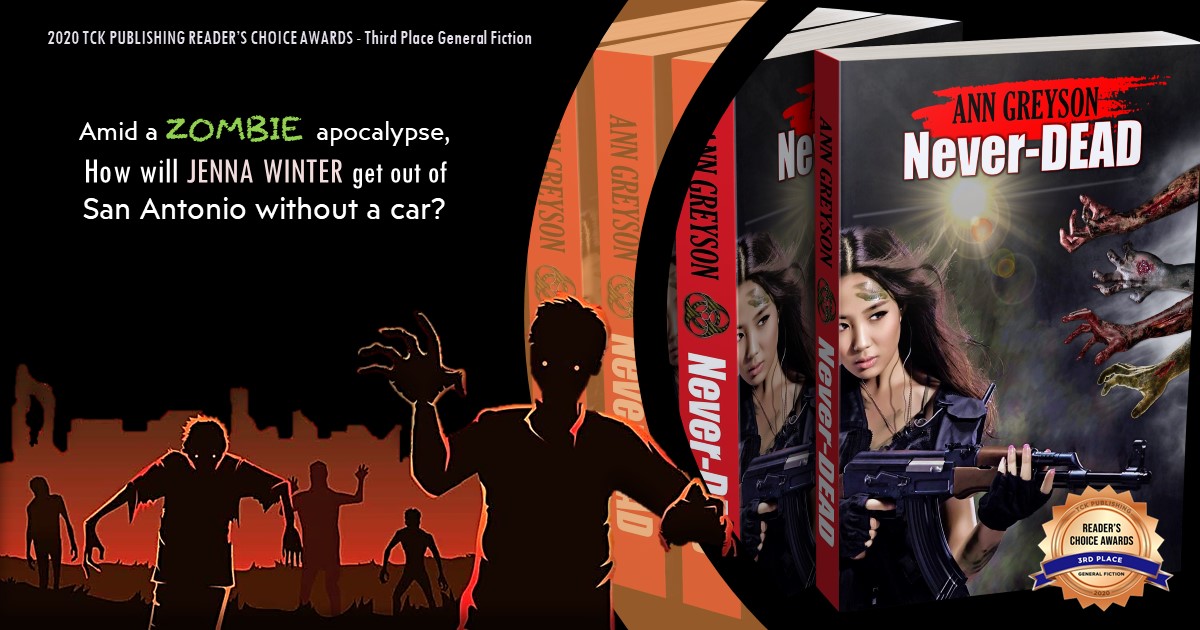 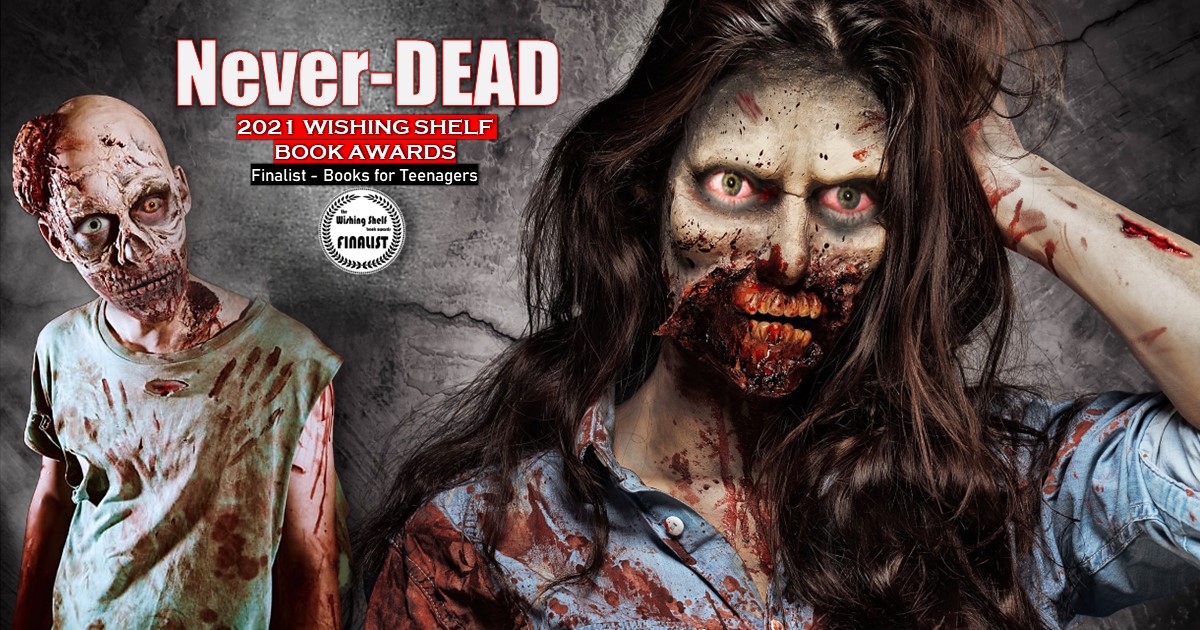 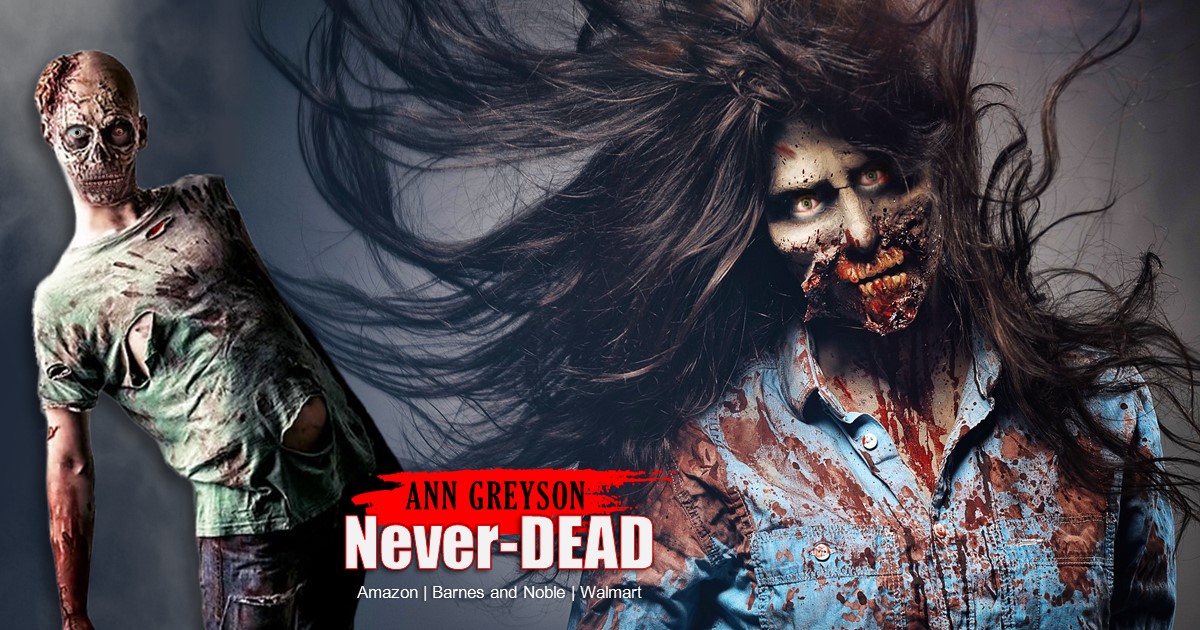 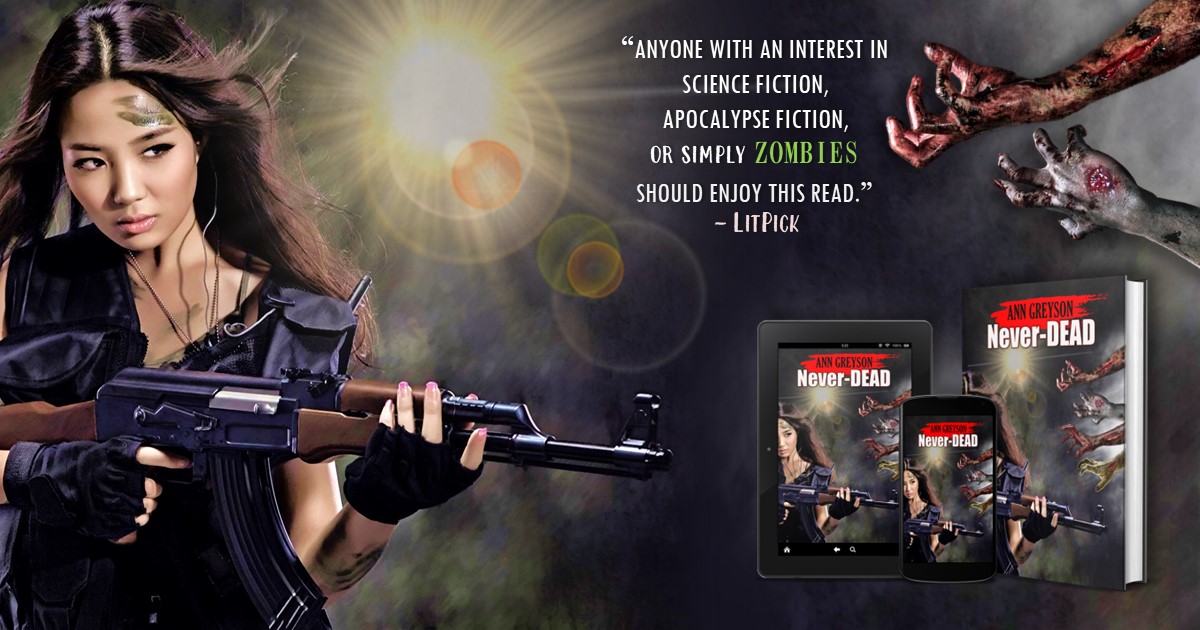 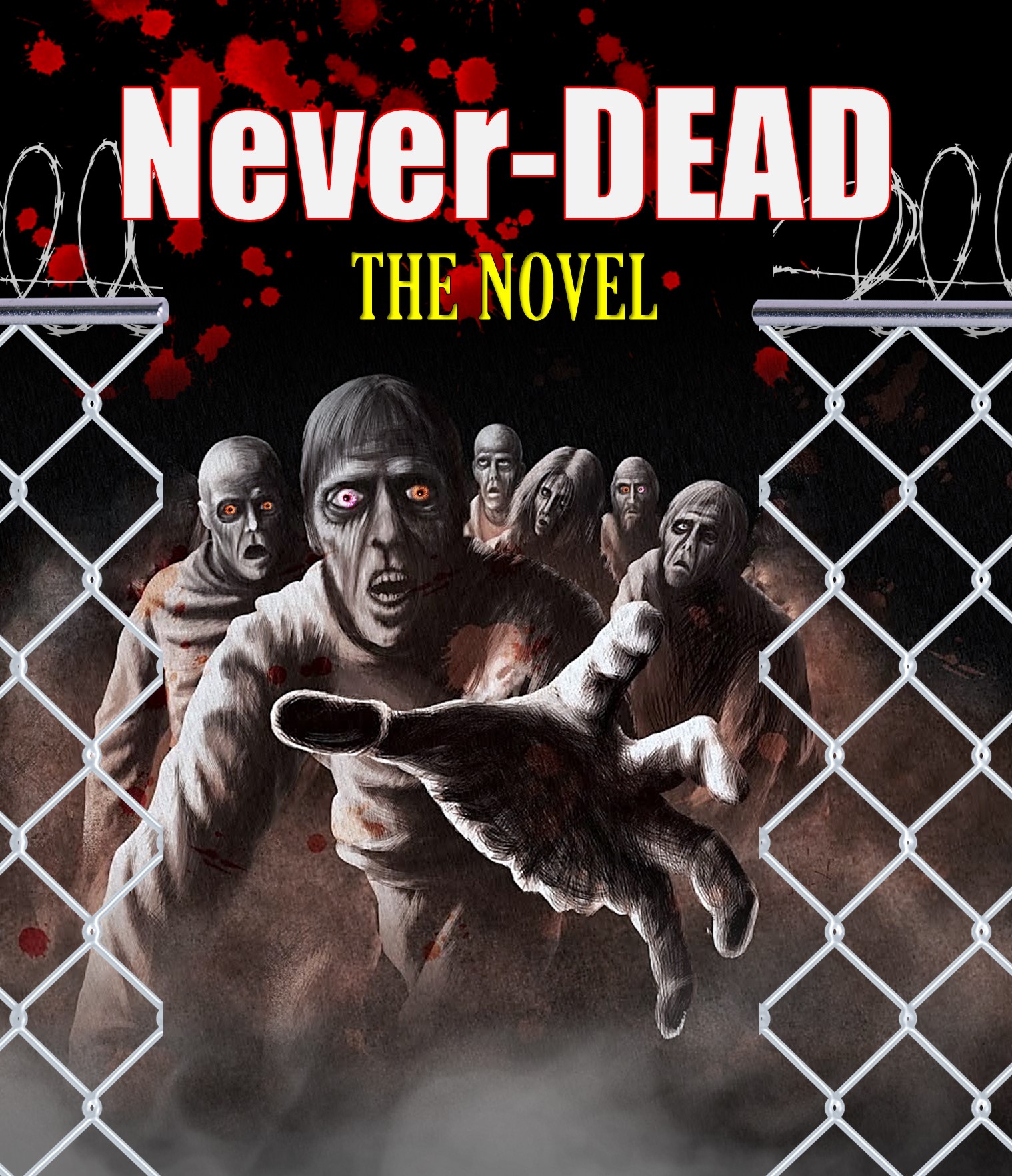 It’s fascinating and I wanted to keep reading ... there were moments in her story where the zombies had "human-like" moments. It was a fresh perspective and made me wonder if the zombies were truly zombies, or if they still had something human in them. The ending was very satisfying ... It felt like you could finally take a sigh of relief even though you knew the world would still be recuperating after the vaccine was released.
Purple Shelf Club review by Alexis Miller - September 29, 2021

Never-DEAD is a captivating story that any zombie or thriller lover would enjoy ... That said, Greyson weaves together the story lines of a diverse cast of strong characters into a book you won’t want to put down.
Goodreads 5-star review post August 28, 2020 and Amazon from The Faerie Review 5-fairies review by Liliyana Shadowlyn Greer - August 29, 2020

The setup in the prologue and beginning chapter remind me of writers like Michael Crichton and Dan Brown. The author introduces readers to a cast of seemingly disconnected characters whom you soon discover all hold different pieces to the same story. I enjoyed being led into the story in this way, learning along with the main characters what is going on across the world and what it could mean for humanity ... Anyone with an interest in science fiction, apocalypse fiction, or simply zombies should enjoy this read. Last, the added twist of the Mayan calendar angle weaves some great historical and science facts into the story. It takes no time at all to become invested in the narrative, and the ending is sure to please even the most avid zombie readers.
Goodreads and Amazon post of LitPick 4-star review by Amanda - April 4, 2020

Greyson’s cinematic narrative easily pulls readers into this bleak but enthralling story of survival. Through Jenna’s ability to maintain an emotional distance from the horrors around her as her survival instinct kicks in, Greyson explores the boundless capacity of perseverance in the human race. Greyson’s prose is simple and accessible, plotting tight, and characterization thoroughly done ... Greyson poignantly portrays people’s fear, insecurities, fickleness, and bitter rage through Jenna and her other characters. Lovers of apocalyptic fiction will be delighted.
Booklife and Goodreads 5-star review post by BooksCoffee from The Prairies Book Review Digital Magazine, Vol 08, June 2020, page 34 and The Prairies Book Review review by Neena H. Brar - March 27, 2020

The action of zombies shambling toward a victim is vivid ... The imagery is vivid and bold, with fast-paced scenes that would make great visuals for a film ... The plot intensifies through conversations with co-workers with references to the Mayan Calendar that predicts the end of time in a specific period, which is the year the story takes place ... This thriller will challenge the reader to question his own response to a cataclysmic event and consider making advanced preparations for unforeseen disasters. Never-DEAD is a survivalist horror story that begs you to ponder if a zombie virus breaks out; would you know how to survive from it?
AuthorsReading.com review by Carol V. Weishampel - March 15, 2020

the balance between pacing and plot is an element of the novel that really shines through. As for the characters that fill this dark fantasy world, they fit perfectly inside their roles. Readers will quickly recognize or even relate to the sisterly-bond between Hannah and Jenna ... For those that love a strong build-up to a nail-biting climax, Never-DEAD is that type of horror story. Of course, more than enough zombies are created along the way and some good characters are sacrificed.
Horror Palace review by Damnetha Jules and Ivan Karhoff - March 3, 2020

A zombie thriller with some discerning twists, it’s the debut release from Ann Greyson and she’s packed quite a punch! Immediately immersive, she weaves the requisite elements of the genre into a nail-biting narrative with sisters Hannah and Jenna finding themselves separated as the Never Dead virus threatens to destroy everything they know and love. Against all odds, Jenna must journey from San Antonio to New Mexico to join Hannah in the safety of the Biogenetics & Disease Control facility. But it’s a journey fraught with peril and this is where Greyson as a writer comes into her own. She’s set out to write a fast-paced character-driven thriller and that’s what she delivers ... The zombie attack set pieces are tense with the ugly reality of real-life and death fights brought to life through Jenna’s many life and death encounters.
BookViral review by John Reese - January 27, 2020

The stakes are high, and the tension is mounting with every minute ... The descriptions are strong and vivid and the dialogues well-crafted. I loved the imagery from the very first page. Ann Greyson allows readers to see the images and the scenes in their mind’s eye and follow characters through tense and dangerous situations ... The crisp writing and richly developed characters make Never-DEAD an enjoyable read. It is fun following characters that beat the never dead and make narrow escapes.
Readers’ Favorite 5-star review by Christian Sia - January 12, 2020 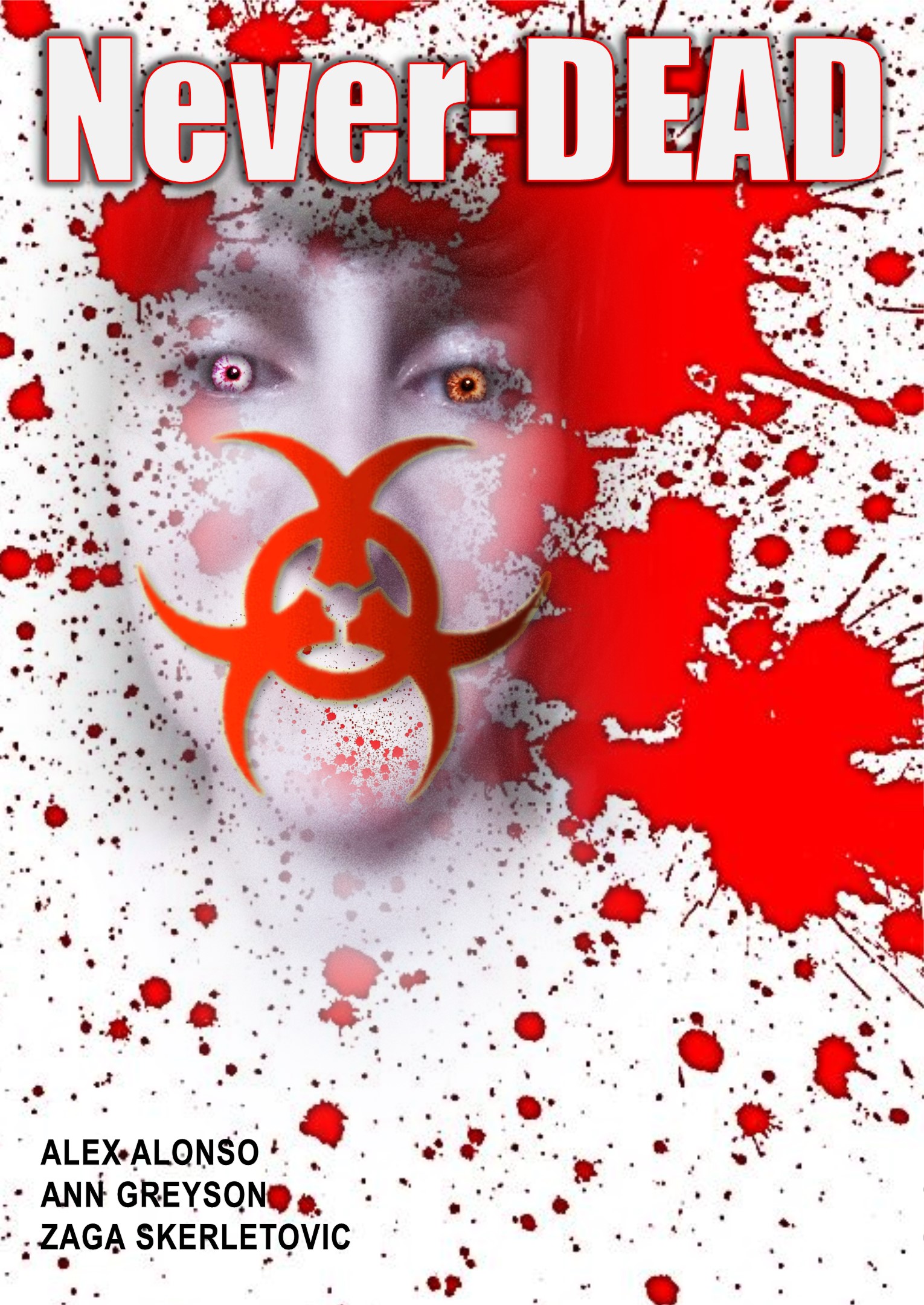 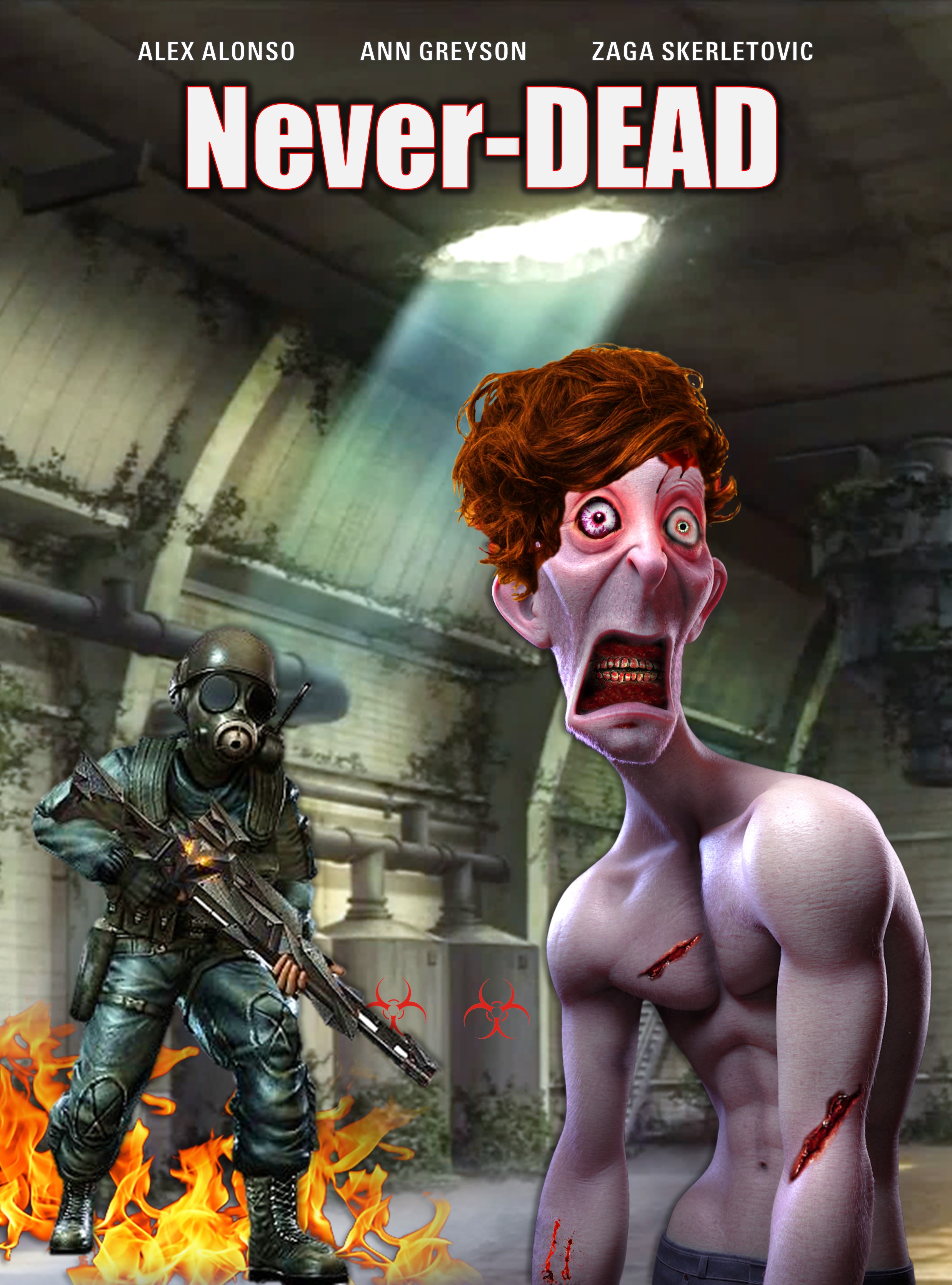